The UNC Charlotte Solar Decathlon 2013 team launched the construction of its competition house, “UrbanEden,” with a groundbreaking ceremony on Friday, February 8, at noon in the University’s Energy Production and Infrastructure Center (EPIC).  The ceremony was also be the occasion for the public announcement of two major sponsorship gifts to the UNC Charlotte team, from Duke Energy and Ingersoll Rand.

UNC Charlotte is one of 20 universities chosen to participate in the US Department of Energy Solar Decathlon 2013. In a series of 10 contests, the Solar Decathlon challenges academic teams from around the world to build completely solar-powered houses that feature energy-efficient construction and appliances and renewable energy systems. The competition will be held in Irvine, California, October 3-13. Established in 2002, the Solar Decathlon has grown into one of the most highly anticipated design competitions in the world, hosting more than 300,000 visitors in 2011. Richard King, Director of the US Department of Energy Solar Decathlon, attended the UNC Charlotte groundbreaking event.  Also present was North Carolina Lieutenant Governor Dan Forest.

Envisioned as an urban infill project, UrbanEden incorporates truly revolutionary approaches to sustainable design and construction. A series of connected indoor and outdoor rooms combine into a single environment that adapts to maximize comfort and minimize energy use.

The University is charged with raising $1M to fund the design, construction, upfit, and transport of the house, and to cover the costs for students and faculty to travel to California to compete. At the groundbreaking event on February 8, Duke Energy and Ingersoll Rand announced their support for the UNC Charlotte project.

The Duke Energy Foundation is donating $150,000 for the project. The company is also providing recycled ash and lending the expertise of its engineers to make geopolymer concrete, which the students will use in the construction of their solar-powered house.

“This is an elite competition, and we applaud UNC Charlotte for being selected,” said Greg Wolf, president of Duke Energy Renewables. “At the same time that we are building emissions-free, large solar power facilities in North Carolina, this project represents important research that will take evolving technology and adapt it for practical use on a smaller scale. This work is a testament to the continued growth of Charlotte and the state as a dynamic energy hub. It is an honor to partner with the students, faculty and other sponsors to advance innovations in energy that will benefit both our customers and our environment for years to come.”

Ingersoll Rand, which nationally is a Supporting Sponsor of the Solar Decathlon 2013, is funding the UNC Charlotte team with a cash gift and in-kind support from its Nexia, Schlage, Trane, and Ingersoll Rand branded products.

“Our communities face increasing pressure to address energy usage. We know it’s possible for today’s homes to achieve net zero energy through smart design, efficient equipment and technology,” said Paul Camuti, senior vice president of innovation and chief technology officer at Ingersoll Rand. “The Solar Decathlon is an opportunity to showcase the talents of leading universities, while helping companies like Ingersoll Rand share knowledge and learn from the best and the brightest through friendly competition.”

The UNC Charlotte team is comprised of faculty and students from three different areas: the School of Architecture, the William States Lee College of Engineering, and the Belk College of Business. Work began on the design of UrbanEden in October 2011. The team will complete the house next summer, testing it on the UNC Charlotte campus before transporting it to California in September. After the competition, the team’s goal is to bring the house back to Charlotte for use as a research lab. 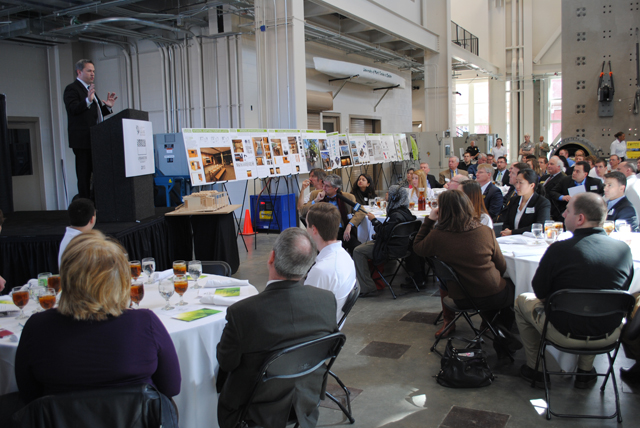