UrbanEden Among Favorites in Matsumoto Competition

The Matsumoto Prize is named in honor of George Matsumoto, a founding faculty member at the N.C. State University School of Design (now College of Design) who is well known for many exemplary Mid-century Modernist houses he designed across North Carolina.

People’s Choice Award winners were selected by 1,200 individuals in an online vote. The Lebda Guest House in Wilmington placed first; second went to the Dasgupta-Saucier House in Raleigh.

Juried winners of the Matsumoto Prize were the Smart-Stell House in Durham, followed by the Herbits House in Leicester and the Hedly House in Asheville. Recipients were selected by a team of professional architects.

UrbanEden won the People’s Choice Award at the 2013 Solar Decathlon. Officials noted that UrbanEden “captured the hearts of visitors. The house is beautiful, with its light-filled rooms that open to a garden-rimmed outdoor deck, laminated bamboo cabinetry and paneling and continuous ash flooring.” 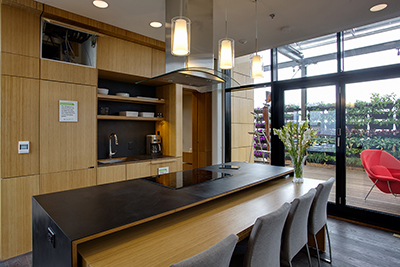